I’ve been following The Struts since 2015, soon after the release of their first full album, Everybody Wants (2014).

Energetic pop / glam rock group from England. Luke Spiller is the front man and his Freddie Mercury-like vibrato and full-throated vocals are super fun to listen to.

I’d seen a few of their vids on YouTube, originals and covers (their take on Lorde’s Royals is better than the original, imo). Real rock and roll, entertaining and enthusiastic. I bought their CD.

Their sophomore effort, Young & Dangerous, came out in 2018. Bought that too. Liked them both. 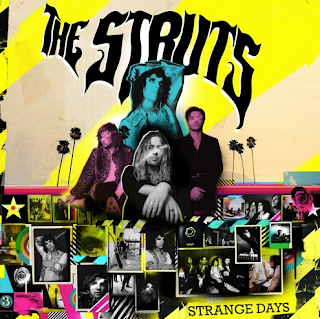 I just got their third album, Strange Days, a few weeks ago. I missed its release last year. But the title still holds – we are living in extraordinarily odd days!

This album kind of reflects our current moment without being obsessive about it. And I resonate with this bit of lyric from the title track: ‘science fiction I believe has become reality.’

Despite the weirdness of the past few years, the message of the song is positive – be grateful for each other, let's get through this together.

According to the liner notes, Spiller feels this is their best album so far. I mean, it's good, but I still like their first two offerings. It's more "them" I think. More pop feel with very catchy hooks.

This one is more old school rock, maybe. So, while some songs are immediate standouts, it has a bunch of different influences, which is neat if you're looking for that sort of thing. Also, fair warning: explicit lyrics abound.

I rate the album 7ish out of 10, meaning I’ll listen to it all the way through for a few weeks straight (until I get bored with it, lol). Then I'll start skipping a track or two every now and then.

Here’s my take on each song.

)6) Cool – another Struts style song, upbeat, driving, but influenced by the Stones for sure (7/10)

)10) Am I Talking to the Champagne (or talking to you)  – this one's slow and easy, with a Santana feel (8/10) and in fact, I'd like to hear Santana cover this song and see what he does with it.

Well, that's about all I have to say about that. Check them out on YouTube and let me know what you think.