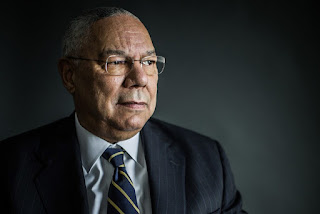 You probably knew this, but Colin Powell’s funeral service was this past Friday, November 5 (he died October 18, 2021).

I think I knew this, but Powell was a life-long Episcopalian. He evidently loved the Anglo-Catholic liturgy, traditional hymns, and high church tradition. Fittingly, his service was held at the Washington National Cathedral in Washington, D.C.

I have yet to watch the service, but I heard it was glorifying to God and placed Jesus Christ at the center of everything. I plan to watch it this week. (Here’s a link to the PBS broadcast that highlights his life prior to the service.)

One of the things I appreciate about the liturgy is that it necessarily proclaims the Gospel. As one wag once said: It’s amazing how often the Bible quotes from the Book of Common Prayer! For me, the Gospel-centeredness of the liturgical tradition is so very impactful. It lifts up Jesus as Lord and Savior.

The funeral service for General Powell was no less God honoring, it seems. For instance, I came across this quote from the memorial meditation by Rev. Stuart A. Kenworthy, the vicar at Washington National Cathedral. It speaks to Powell’s faith in Christ, and is a very good witness to the saving power of Jesus.

“God raised Jesus so that you and I might share in his resurrection, and if you turn to him and accept him in faith, he will come into you and raise you into that new and eternal life now.”

A number of years ago, I heard General Colin Powell speak. I remember him as a man of quiet integrity, telling the story of his humble beginnings, of his childhood in Harlem and the South Bronx.

He was the son of Jamaican immigrants. He came from a disciplined home. He spoke about the positive aspects of being shamed into doing what was right. In fact, I recall him talking about the moms of his neighborhood correcting his behavior and warning him that they’d tell his parents on him! (Oh, for a return to those days when everyone was expected to mind their manners in public.)

Powell eventually attended the City College of New York, was in ROTC, then served in Vietnam. He went far! He became a four-star general and the first Black secretary of state, serving 2001 to 2005 under President George W. Bush. Before that, he served as National Security Advisor under Ronald Reagan, and as Chairman of the Joint Chiefs of Staff under George H. W. Bush and William Jefferson Blythe III (aka Bill Clinton).

It is with respect that I take a moment and remember him as a statesman, a patriot, an American, a Christian. He died at age 84 from blood cancer complicated by Parkinson’s and covid. Rest in peace, Mr. Powell.

(I don't know who to credit the above photo. If you know, let me know.)