The end is in sight!

3,100 words today. Chapters 11 to 13. Heading into the final conflict and climax. Resolution around the corner. Probably wrap the story up tomorrow with a thousand word denouement.

I get a kick out of how my stories come together. Almost all stories, actually. Western storytelling is typically structured like that mountain of a plot diagram we all learned in Middle School Language Arts. It’s kind of in our DNA. We resonate with the predictable pacing of the opening conflict or struggle, the rising action, added tension, final conflict, climax, resolution, and final release. 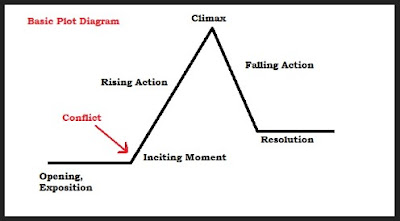 Now when the resolution is victorious and there’s a happily-ever-after denouement, that’s generally called (in classic lit terms) a comedy. Think Shakespeare’s happy plays! But if the final conflict brings about defeat and the final scene is one of loss, that’s a tragedy. Romeo and Juliet, anyone?

I’m mostly into light and happy, fun and whimsy so my stories almost always end in good feels. And Cauldron is no exception. The sinister Dr. Vance and her colleague on the Witch and Warlock Guild Council will be confronted. The tense stand-off will end (no spoilers!), um, somehow! And the magical cats in captivity will (no spoilers!), um, end up…happy.

Ah, but if the story were that predictable, then why read the story? This is where those surprise twists come in. And that’s what I get a kick out of when I’m writing. A few twists and turns just naturally show themselves. So I run with them.

When I started out, I knew the set-up: cats were being held captive, and Mister would somehow rescue them. Didn’t know how. Didn’t care, actually, because I knew that the creative part of my brain would come up with some interesting scenarios as to how that might happen.

From a craft point of view, I think it was science fiction writer Kate Wilhelm who talked about taking the third option. What she meant was, as I ponder where the story is going – say I’m at a crossroads – I can envision at least one or two options to move the story forward.

The first option, Wilhelm said, is almost always too easy. I’m paraphrasing here, probably totally messing it up. But anyway, the first idea is usually very predictable. “Oh, Mister should unlock the cages with his magical ability and the cats escape.” Boorrrinnng. If the first option is too easily guessed, then the reading audience quickly loses interest.

Second option is probably a bit more creative, but still predictable. It’s probably not that exciting and leaves the reader thinking, meh. “Okay Mister. Maybe you can tie up the bad guys in some sort of magic rope!” (That would be super weird, but heh, it’s an example.)

Wilhelm advocates for the third option, something creative that is unexpected for even the writer. Because if the writer is surprised by a development in the story, the reader should be too. Go figure. 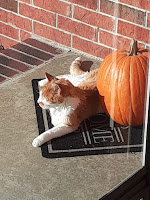 So for Mister, he did something unexpected to save the kitties. Which led to a final bit of tension which I’ll resolve tomorrow in the final scene. But what’s cool is that my subconscious planted the seeds for this solution early in the story. So while the development was surprising to me (and I hope it will be for the reader too), it wasn’t out of the blue. If you see what I mean.

Because out of the blue resolutions (Deus ex machina) are generally not very satisfying. It’s like the author kind of cheated and had some external force or non-playing character jump into the story and make everything better. Not saying that wouldn’t work if done right, but most experts say to avoid that strategy.

I hope if you read Cauldron, you’ll feel like I do, that the climax and resolution arise naturally but with a nice bit of twisty surprise attached. I guess we’ll see!

Follow along each day as I post my progress in writing A Cauldron of Cats, Book 2 in my Mister the Magical Cat Series (available for pre-order now; affiliate links used throughout). You can also "Tip a Buck & Get a Book" and I'll send you Book 1 now, Cat Potion No. 9.

Lyndon Perry is a speculative fiction writer living in Puerto Rico. He's a former pastor and current husband, father, coffee drinker, and cat-wrangler to Charlie, a 19 year old orange and white tabby who serves as the inspiration to Mister the Magical Cat. You can find him a variety of places online. Check out his various Linktree Locations and say hello!