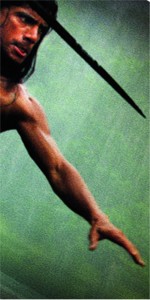 End of the Spear...
Start of an Era
by Lyn Perry from Bloggin' Outloud

A quality film that stands on its own without a saccharin morality play to cheapen its appeal. This strategically narrated drama is a move in the right direction for movies broadly - and unfortunately - catagorized as "inspirational."

As Every Tribe Entertainment, the production company behind the release, states:

Frustrated with the lack of quality story content in films today, and driven to provide more than just entertainment in our films, Every Tribe was founded to bring to life stories of courage and strength of the human spirit. Courage, tolerance, mercy, forgiveness, faith and love. We base our film choices on what we hope to inspire rather than what we hope to sell. (from website)

Their purpose: "To create quality entertainment for a broad audience that inspires hope through truth."

With End of the Spear, we have a start of an era. Although Hollywood will continue to distribute gratuitous violence and market to our culture's prurient nature, I believe we will see an increase in projects that not only entertain, but have the capacity to make a positive difference in our world and culture.

This is, in fact, why the Waodani agreed to tell their story.

For those unfamiliar with the events, End of the Spear is a true telling of the brutal killing ("spearing") of 5 missionaries in a remote Ecuadorian jungle by a clan of warriors back in 1956. It is told by Steve Saint, son of Nate Saint, one of the martyrs trying to bring a message of peace to this violent tribe. Although they had guns, the missionaries did not retaliate when attacked.

This message of non-violence, forgiveness, peace and reconciliation was further demonstrated when some of the women relatives - and children - of the slain missionaries returned to the Waodani to live with and serve them. The rationale is clearly proclaimed: It is because "Waengogi (God) had a son who was speared, but he did not spear back."

This truth saved - literally! - a tribe near extinction. With a homicide rate of nearly 60%, a selected practice of infanticide, and the constant warring with other tribes, the Waodani had dwindled to about 600 people. Within a few years of receiving the women and following the "markings along the path" (God's word on living right) the homicide rate dropped by 90%. They now number over 2000. (from website)

And many of the Waodani - including Mincaye, the man who actually killed Nate Saint - believe they now have a message to share with us. Cal Thomas comments on Steve Saint's desire to retell this story for a new audience.

The Waodani at first refused to cooperate, but when [Saint] told them about violence in American culture, like the Columbine shootings, they decided to participate. In a promotional DVD for the movie, Mincaye says, "The foreigners are living as angry and violent as we once did. But they could be living well. We changed. The foreigners (can change), too." (Townhall.com)

Steve Saint and Mincaye have recently toured America promoting reconciliation, peace, and forgiveness. And they have had an impact, both here and in the jungles. Much of the revenue generated by this film will go back to help the indigenous people of Ecuador.

This is why I believe we will see more movies that make a positive difference in the lives of their audience. Truth, when accompanied by love, works. And films that combine these elements in a quality offering will not only make an impact, they'll make a well-earned profit. Such are the films with a future.

Blog Reviews ~
Questions & Answers from another who saw it
Blogs4God Roundup of various Christian bloggers
Al Mohler on the controversy in casting Chad Allen
A blog reflecting on the controversy: Post 1 & Post 2
Crosswalk.com's review and Beyond the Gates of Splendor

UPDATE (1.24.06): Another good review at Jordan's View
Along with World Magazine article and Independent Critics.

(* Note: The Daily Brew attempts to engage ideas and address contemporary themes with truthful and relevant principles for the purpose of positively impacting our culture. Thank you for reading. lgp)
Posted by Lyn at Monday, January 23, 2006