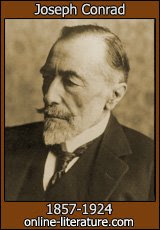 First day we were assigned Joseph Conrad's novella Heart of Darkness. This was my first exposure to Conrad (author of Lord Jim, which we were supposed to have read in high school, but I doubt I did, lol).

The story takes the reader to "darkest Africa" (of the late 1800s) and exposes for examination the heart and soul of both Marlow, the story teller, and Kurtz, an ivory merchant. The novella is a commentary on the mercenary nature of colonialism and how society then (and today) is not that far removed from the "savage" ways of primeval man.

Here's what I mean regarding this mindset. Marlow states:

"They were conquerors, and for that you want only brute force - nothing to boast of, when you have it, since your strength is just an accident arising from the weakness of others. They grabbed what they could get for the sake of what was to be got. It was just robbery with violence, aggravated murder on a great scale, and men going at it blind - as is very proper for those who tackle darkness. The conquest of the earth, which mostly means the taking it away from those who have a different complexion or slightly flatter noses than ourselves, is not a pretty thing when you look into it too much. What redeems it is the idea only. An idea at the back of it; not a sentimental pretense but an idea; and an unselfish belief in the idea - something you can set up, and bow down before, and offer a sacrifice to...."

Kurtz embraced this idea fully, but in the end (after a detailed but sometimes plodding narrative - Conrad is a sloooow read, imo), looking into the abyss of death, could only cry out, "The horror! The horror!" Which gave rise to the equally famous line, "Mistah Kurtz - he dead" (used as an epigraph by T.S. Eliot in his poem, "The Hollow Men").

Another interesting tidbit is that this story gave inspiration to the film Apocalypse Now. At any rate, Heart of Darkness is a good, if somewhat laborious, read. Thumbs up if you find yourself with an open weekend.
Posted by Lyn at Monday, July 06, 2009