How to Write Flash Fiction 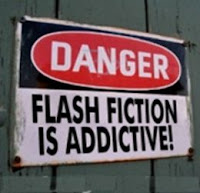 Flash Fiction and How to Write It - Part 1

First of all, if you're not familiar with flash fiction, don't be embarrassed. Recently, a writer friend of mine asked me to explain the concept since there'd been a good amount of hype about it in his social circle and he mostly just smiled and nodded.

A quick definition, then. Flash fiction is a story that clocks in at about 1000 words. Therefore, it’s a quick read, over in a flash. Some gauge the range anywhere from 500 to 1500 words. But the idea is brevity. Any story you can tell quickly might be considered a candidate for flash.

But here's the catch. It's a story. Not a sketch. Not a scene. Not a vignette. Flash fiction is a story told in about 1000 words. While there's some debate even as to what elements are required to create a story, I adhere to the traditional Big 3 - characterization, setting, and plot (crisis, climax, & denouement). A well written piece of flash, in my opinion, balances these elements. Add to this mix an engaging voice (writing style) and you have a successful short short piece.

How short can a story be? I guess that depends on what the writer (or reader) is willing to sacrifice. It's difficult to balance setting, characterization, and a storyline that resolves nicely, so, by necessity, something has to give. I tend to shortchange setting, myself. Many of my flash fictions are dialog heavy and rely on conversation to move the plot along. Where does it take place? Who knows! Who cares? It's fun, it's fast. It's flash fiction!

But really, a tale without setting is probably more of a story concept. And, admittedly, most flash fictions are little more than seed stories that need expanding. In my next post, I'll look at some of the common pitfalls of writing flash (and how to avoid them), including this tendency to simply present a scenario and call it good. Until then, what are your thoughts on flash fiction?