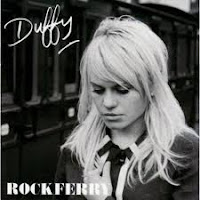 In this corner, Duffy weighs in with her debut album, Rockferry (2008). This album boasts some great songs, even though the radio hit "Mercy" (a good song, mind you) gave the wrong impression as to the totality of the album's style. "Warwick Avenue" is more representative of the collection's feel and showcases Duffy's range, vocal strength, and versatility. "Distant Dreamer" is probably my favorite song (it builds, baby, it builds), but "Stepping Stone" is a haunting tune and lyric. I like the variety of song styles on this CD as it provides something for every mood. Rockferry is a great debut album, too bad her 2010 Endlessly didn't do as well - I probably would have bought it if I'd been reminded of it on the radio. 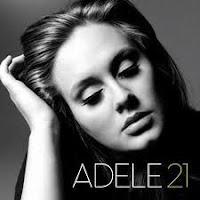 In the opposite corner is Adele boasting her second studio album 21 (2011). I'm a bit behind the curve here having only recently purchased her CD, evidently a followup to 19, her debut from 2008. Both titles are indicative of her age at production, which underscores how remarkably mature her voice is for her age and experience. The first track (and radio release), "Rolling in the Deep," is a good song and a fair representative of the rest of the album's sound, but it is a bit repetitive. In fact, most of the songs rely on a catchy hook and then play it for all its worth. The other radio hits are "Set Fire to the Rain" and "Someone Like You" but my favorite is probably "Turning Tables." I like this collection overall, but the songs do start to sound the same after awhile.

So, which album is better? Duffy vs. Adele. Imagine a Venn Diagram (I'm introducing Compare/Contrast to my 6th grade Language Arts class).

First of all, they're both young women with moving and inspiring voices. They both sing a popular form of "new blues" or Motown-inspired British soul. They're both from England (okay, okay, Duffy is Welsh). And both albums are about the loss of love and the "screw you, I'm over you" feminine independence of our current and last decade (think of them as providing the soundtrack for Sex and the City). Oh, and the cover art for each album features the singer in b/w with downcast eyes. The disappointment of unrequited love!

+ Typical lyric from Duffy: "I will never be your stepping stone. Take it all or leave me alone." (4th track, "Stepping Stone")

+ Typical lyric from Adele: "Next time I'll be braver, I'll be my own savior standing on my own two feet." (3rd track, "Turning Tables")

There are differences as well. As alluded to, Adele's song selection is consistent in the new blues tone and style whereas Duffy's album is a mix of rhythm, blues, soul, and pop. I think Duffy's range is greater since Adele starts to whine a bit in the higher register. And...hmm, I'm sure there are other differences, but this post is already running longer than usual.So you'll have to do your own Venn diagram. Or T-chart. And let me know.

Bottom line. If you like one, you'll probably like the other; their albums round out this corner of the contemporary female pop/blues genre. What's my preference? Well, if you put an MP3 player to my head and told me to choose, I'd have to lean toward Duffy. Can you say the same?
Posted by Lyn at Thursday, January 12, 2012