No Such Thing as Christian Art 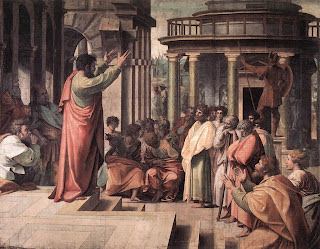 Because "Christian" isn't an adjective. It's a noun.

Yes, I know. The word has evolved to function grammatically as an adjective, much like "American." But we're off target when we use it this way. A Christian is a "little Christ;" an American is not a little Amerigo. (And I say this as a person who definitely leans toward linguistic description and away from linguistic prescription.) So, for me in part, it's a language issue.

But the real beef I have with using Christian as an adjective to define art is that it doesn't do a very good job at it. It's a nonsensical term. What exactly is Christian art? Christian music? a Christian novel? Much of what passes as "Christian" is simply, and only mildly, religious (and fairly saccharine) and isn't at all kerygmatic*. And if the kerygma isn't present, how can something be defined as Christian?

I don't mean to drag this leader in the "Christian Speculative Fiction" movement (ie, Rebecca LuElla Miller, whom I respect) into a hot debate, but I did read this post recently (I don't have her original source at this point, but will link to it later) and found I simply disagreed with her. The specific issue at hand is what qualifies as Christian speculative fiction, but the principle is broader:

The term speculative includes the various forms of fantasy (urban, epic, dystopian, etc.), science fiction (space opera, techno, cyberpunk, etc.), and supernatural suspense or thriller (terms for types of horror). Christian speculative fiction is written by a Christian, but not everything written by Christians qualifies as “Christian.” Rather some element of the story needs to be distinctly connected with what it means to be Christian. Perhaps the characters are predominantly Christian. The plot might revolve around something distinctly Christian. Or the themes may relate in a specific way to the Christian faith. And here is the point that separates Christian fiction, I believe, from all other fiction. Christian fiction speaks the truth about God. Other fiction can speak the truth about morals or the way the world works or what makes a person love or hate or live on the edge. Other fiction might be silent about God. Other fiction might speak a lie (though undoubtedly the author believes that what he’s written is true) about any of these things. Only Christian fiction speaks the truth about God. - Rebecca LuElla Miller
On the surface, this makes sense. But a novel, or song, or piece of art could meet these qualifications and still not be kerygmatic. And, something could be kerygmatic and break each of these "rules" above. NonChristian fiction, music, art, etc., speaks the truth about God all the time. I'm thinking specifically of Andres Serrano's 1987 photograph, "Immersion (Piss Christ)." I think this piece is ultimately, and essentially, Christian. (If Christ on a cross in a glass of urine isn't the gospel, I don't know what is.)

Now, I don't know if Andres Serrano is a follower of Christ or not. To me it doesn't matter; that piece expresses truth. But here's the thing. NonChristian artists may not want us going around calling their works "Christian." That may not be their intent. So I'm really more comfortable dropping that label and simply using the term religious or faith-inspired or, here's an idea...truthful. Because this will cut through a lot of the crap that passes as Christian but really isn't - it's not truthful.

That's where I'm at at this point anyway. If something is truthful, then I don't care if it's "Christian" or not. That's why I don't use the word as an adjective. There is no such thing as Christian art; there is only truth and falsity. The closer art moves toward truth, the more "Christian" it becomes.

Am I totally consistent here? Do I eliminate all adjectival uses of the word Christian? No. I sometimes use the term Christian faith to specify a religious perspective. And, I think one can have a Christian worldview (as opposed to an atheist, monistic, or even generally theistic worldview). But maybe I should rethink those uses of Christian as an adjective as well. Maybe I should simply let truth speak plainly.

*Update: A friend noted that "kerygma" might need a link and definition. So here's a link to wiki, which works for a basic understanding of the term. My take: If something is kerygmatic, then it speaks to the essential nature of the gospel. The gospel, in turn, is the life/ministry/proclamation of Jesus Christ. So anything that points to God's reign initiated, enacted, and consummated in Christ's life, death, resurrection, Spirit-bestowing, and triumphant returning is gospel (the "good news") and thus kerygmatic (what is preached and proclaimed).
Posted by Lyn at Thursday, October 04, 2012