Just over a year ago I noted that serial novels might be experiencing a resurgence. Even then, Hugh Howey's series of stories that became Wool was a shining example of such an approach (even though he said it was really an accidental way to write his NY Times Bestseller!). Of course, Stephen King did it with The Green Mile in the '90s. And someone named Charles Dickens tried it a few times before that.

With the ubiquitous ereader, however, snack-sized novellas seem to be a perfect fit for on-the-go fans of fiction. A good novella (anywhere from about 15,000 to 40,000 words) can be consumed within an hour or two, providing an afternoon of enjoyment for the price of a coffee. Then, if you like the storyline, you're just one click away from purchasing the next in the series. A great boon for binge readers who, when they find new-to-them authors, have to catch up on that backlist of stories immediately.

What's cool is that new-to-the-world indie writers often give away their first story within a series for free. This provides a no-risk opportunity for readers to try something from someone they've never heard of before. It happened that way with me. I was fortunate enough to be introduced to Simon Kewin when I joined the SpecFic Authors Collective, a co-op of four writers who give away free stories each month. I'd never heard of him or read anything by him. My first taste was The Genehunter #1 - The Wrong Tom Jacks. Here's a link to my review at Goodreads. 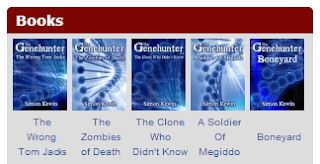 And here's what I said in reviewing novella #2: That this 5-part novel "could be the next SF indie hit since Hugh Howey's post-apocalypse Silo saga, Wool." I'm no Jeane Dixon, but Kewin's first installment (as of this blogging) is #39 in the cyberpunk category at Amazon. Tres cool. Get them now while they're still cheap, because once these stories are compiled into an omnibus and get picked up by a major publisher, you can brag that you have the original on your ereader. Just saying.
Posted by Lyn at Saturday, March 23, 2013