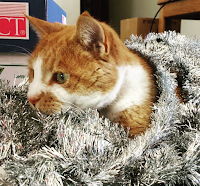 I'm a cat person, I'll admit it. And a few years ago I wrote about Mack the Magical Cat in Ma Tutt's Donut Hut. (And yes, I'm going to eventually finish book 2 for those who are waiting. Eventually.)

But one day at Starbucks I was writing with a friend and couldn't concentrate on the story at hand so I just grabbed a pen and paper and started a new story about a guy, down on his luck, who fed his last can of tuna to this cat who'd adopted him a few months before.

Character in a setting with a problem. 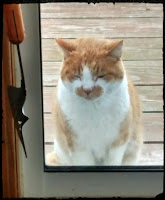 It was a fun little opening scenario, but as I often do, I abandoned the story after about the first 300 words or so. It was just sitting there in my notebook, analog style, for a few months. Maybe longer. So when this #60DayChallenge came along, I saw it in my notebook, started typing it into the computer, and away we went.

It turned into a cute little speculative fantasy story of about 3400 words called Tucker and Mr. Chilly. (Mr. Chilly's the cat, and Charlie - pictured above and to the right - was my inspiration ;). If you're interested in reading it, let me know (swear word warning!). Right now it's trying to find a home, having been rejected by a pro market but with some very kind words.

Tomorrow, I'll tell you about the origin for "Maysi's First Assignment."
Posted by Lyn at Wednesday, October 25, 2017