If you keep fiddling around in this writing world long enough you accidently end up with a series of stories featuring the same set of characters, theme, and setting. At least, that's what I found when I wrote my first "Billy Farnsworth, Zombie Hunter" flash fiction, "The Hunt, Hunt." (You can read it here online, really really short!)

The second one, "Scary Moments," came along fairly quickly after that. (Again, read it here if you want, another short one!) Now, if you've read these, you know there's not much zombie in them. It's a bit of silliness where I get to tell jokes and dress it up as a story. Sort of like a pun joke, feghoot, or shaggy dog story. You may groan, but I get a kick out of them. 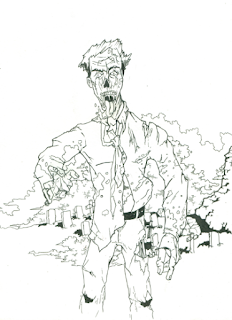 So I thought I would write a third one, playing off a 'princess' theme, father/daughter style, featuring Billy's sister, Steph. And there were some humorous scenarios, but I realized it was turning into an actual story! And a touching, heartfelt one at that! After abandoning it for awhile I finally finished "The Princess and the Zombie" a few years ago, closing the Billy Farnsworth canon.

Or so I thought. Along came the #60DayChallenge and I needed an idea (writing 30 stories in 60 days sort of necessitates that!) and thought of Billy. Somewhat picking up where Princess left off, I had Billy wanting to enter a zombie hunting tournament with his best friend, but the story told me his best friend was moving away so he needed a new partner. His sister, Stephanie? No way! (They both told me no, just no.) So Billy's mom suggested someone new from school. Thus "The Newbie and the Zombie" was born. Or got fleshed out. Get it? Fleshed out? Nevermind.

At any rate, The Newbie is actually looking for a home. (If you want to read it, let me know.) Once it's published and I get past the exclusive use window (remember, we license rights to read or publish, we don't ever sell a story permanently), I'll put the four stories into a collection and sell them myself. Lots of fun. I'll let you know what happens and when.

In the meantime, you can check my progress here, or click the current projects tab above. Thanks for reading. Next up, I'll chat about Tornado Drakes' Last Day of School, a mainstream literary piece, but of course, still with a bit of humor.

(Note: zombie sketch by Keegan Rogers and Matthew Garcia used by permission from the creators)
Posted by Lyn at Thursday, November 02, 2017