History is going somewhere. It has a beginning, a middle, and an end. 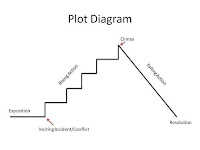 Some have stopped reading already. That's because a lot of people today subconsciously have bought into postmodernism's despair - the unexamined belief that history lacks an overarching narrative.

Subconscious, I say, because people look around and see no rhyme or reason for the chaos we are experiencing as a society or in our world. So we jump to the conclusion that there is no plot, no story, no direction to history.

We humans attempt great things in history (the benefits of industrialisation, for example) and yet experience a backlash we can't control (climate change, global warming, as possibilities).

We try to get better as a society (through education, for example) and yet our educated elitist society has become overly selfish (through mindsets of entitlement and victimization, as possibilities).

We try try try. Then we fail fail fail. No utopia. No kingdom come.

I can see how people might think that way at first blush. But take a closer look. All those attempts throughout history to 'better ourselves' are actually clues pointing to the innate and purposeful narrative structure of history.

In other words, our so so many try/fail cycles throughout the ages are part of the overall plot structure of history. A foreseen, anticipated narrative arc that will ultimately make sense in the end. And come to a satisfying conclusion.

Ever wonder why most of the stories you read "work" while others fall short? One reason is that most stories have a pattern that echoes the actual structure of the universe - there is a beginning, a middle, and an end.

And this three act movement has a backbone to it, a plot structure that goes something like this:

Beginning: Character in a setting with a problem.
Middle: A series of try/fail cycles, that increasingly get worse, until the climax.
End: A final success (or failure, given the particular story), which validates the whole story.

Beginning: Our main character, Human, is in a garden paradise walking with God. But what if Human decides to not walk with God? What might happen if Human goes it alone?

Plot twist - In the midst of this perpetual try/fail cycle, God becomes Human. It happened in a manger in Bethelehm, by the way. New Human grows, follows God perfectly, does everything right. New Human invites Old Human to walk with God again.

This is the key turning point in the story. Redeemed Human gets back on track, the end is in sight. One day, the world will once again become a paradise. Better than the original garden setting, in fact. The best happily ever after ending is just around the corner.

And yet. Old Human struggles against New Human, still - even after a successful turn at the try/fail cycle - wanting to go it alone. So even though there is initial success (Christmas! Joy to the World! Peace on Earth!), there is continued tension until the story's final climax...

...which we have not yet experienced.

We are still in the try/fail cycle. We are in the midst of the story. That's why some people are in subconscious despair. They've given up on history going somewhere and decry any overarching meaningful narrative to life's purposeful direction.

But see, life's failures are simply evidence that we old humans are still wrestling with the 'New Human/Adam' and trying to live life without God. But the good news is we can leave the wrestling behind and walk with God again. It's that simple. We follow the New Adam into a new paradise.

This is God's plan for history. That humanity comes back home.

Back to the story...

End: The final try/fail cycle ends in success - New Human returns to earth and fully establishes a world that is perfect in every way. The validation of history is when Redeemed Human enters into an eternity of rest (shalom) with God, where all painful failures cease. A new adventure begins.

History is going somewhere. We're in the middle of the story now. Nearer the end than the beginning. So don't despair. God's purpose in history is to create a people he can call his own. The invitation was sent to us at Bethlehem some 2,000 years ago.

So, if you're ready for a new adventure, leave your own personal try/fail cycle behind and enter into God's rest, God's shalom, this Christmas season.