Welcome to this week's hop!

Weekend Writing Warriors is where participants post 8 to 10 sentences of their latest release or work-in-progress. All genres represented; commenting is encouraged. Spread the word: #8sunday #wewriwa

This is book two of a curious cozy featuring a magical cat named Mack and the owner of a donut hut named Ma Tutt. Each week I'll simply post the next 8 to 10 sentences of my novel, so obviously not all of these will be complete scenes. Still, should be fun. To catch up, click #WIPSnippet.

Mack greeted the two women with a surly mrrow as they entered the kitchen and hit the lights. Ma tore the daily page off the wall-mounted calendar and tossed Thursday, July 3rd, in the trash as the tabby impatiently nudged a few legs.

“Evidently, he doesn’t like the later start time,” Martía said. She found his plastic bin of food, the cat griping all the while. “It’s too early for breakfast, Mack!” she scolded, but acquiesced to his demands and filled his bowl with kibble. The throaty complaints turned to satisfied purrs as he dug in.

“No such thing as too early for breakfast,” Dolly said, shaking her head, “and after all the time you’ve spent with him, you should know that by now.”

“Ah, but we didn’t spoil him as you have done...cat food purchased from a store? Oosh, this is why he has claws, for there is a mountainside to explore behind the Hut and plenty of mice for him to find.”

Ma shivered at the thought and said, “As long as he never shows me his prize, I’ll just pretend he doesn’t hunt.” 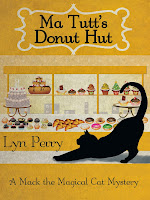 If you want to get in on the mystery and like gentle bakery stories - and with a magical cat! - then book one, Ma Tutt's Donut Hut, might be of interest. Available at Amazon. Here's the back copy:

Dolly Tutt has just opened her own bakery in the small mountain community of Sugar Pine Station. But the Creamy Pie franchise across the street is giving her fits. Her business is dying. She needs a miracle or she'll be forced to close.

Fortunately, Mack, a mysterious tabby that came with the doughnut shop, lends a paw by pointing Dolly to a magical ingredient that definitely puts the spice back in her life and rejuvenates the Donut Hut. Unfortunately, it also unleashes a series of catastrophes that may end up destroying her business once and for all.

To find out what else I write, visit my publishing site, Tule Fog Press. And if you subscribe to my monthly newsletter, I'll send you a free ebook as a thank you gift. Appreciate you dropping by!