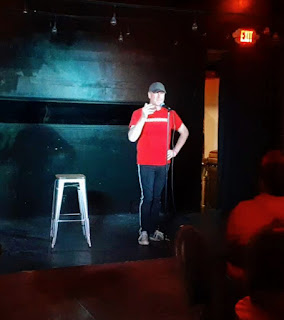 Tried my hand at some stand-up comedy the other night. I think I bombed.

Hard to tell because no one was paying any attention. I mean, I assume I got a few laughs but all the people loud-talking in the back sort of overwhelmed the venue.

Plus the bright lights blinded me while I was on stage. So I did my five-minute routine as if I was practicing in front of the mirror. I get more laughs during practice. What can I say? I chuckle at my own jokes.

I had a friend record my set, but the sound and video quality was pretty bad. Worse than the jokes. But if you’re interested in a bit of what I said, here are some of my gags…

Started off as a pastor in Western PA. They speak funny there. Use different words, have different meanings to words. Found that out right away. Exploring the small town we moved to, we’d bump into people and they’d say, “Are you’ns from around here?”

Found out we’ns ain’t a word. They’d just stare at me.

Nevertheless, most people were friendly. Families in the church would come up after the service and introduce themselves.

One mom told Little Johnny to shake the pastor’s hand. I put out my hand but Little Johnny immediately turned his back and buried his face in his mother’s arms.

She apologized and said, “He’s a little backward.”

We’ns ain’t from around here.

Okay, I admit, not side-splitting funny but it was part of an overall story arc that I thought went pretty well. And I learned some things I’d do differently next time. If there is a next time.

One reason I may not go back is I just don’t like dirty jokes. And most of the comics at this open mic specialize in body part humor, sex and swear word humor, and in general being loud and drunk.

My routine was a bit more subtle, and so not suited for a bar venue. I am interested in the art form, though. So may keep trying. I’ll just keep in mind the following points next time:

Energy. I was kind of too laid back, but if you’re going to gain and hold the attention of the audience at this kind of open mic, you gotta be enthusiastic. Shout, baby!

Pacing. Slow it down, man, slow it down. The loud reverb from the mic in a place with terrible acoustics just makes everything a mumble jumble. Speak clearly, distinctly, and allow some space to filter in between sentences.

Timing. Of course. Goes without saying. Gestures are a great way to indicate that the laugh is ready to launch. With the right physical moves, vocal pauses, expressions, and final delivery, the gag line goes over a lot better.

Finally, keep the callback. A callback is a wrap-up joke that alludes to an earlier humorous line. An internal allusion. A minor example is the we’ns line I used above.

At my stand-up the other night I finished my routine with a callback to my first joke - which I didn’t include in the example above. Because it uses a borderline bad word. Okay, okay. So some slightly crude jokes are funny to me. Sue me.

Craig Johnson is a master of the callback in his Longmire books. He’ll set up a joke and a few chapters later, pull the trigger. It’s a literary device that works well in sermons too. Not as a joke, but as a reiteration of the main point or theme, leaving the audience with the core of the message as the last thing to ponder.

Anyway, since the video was bad, I did write out my routine if you want to read it. Let me know. Won’t be the same as watching live, of course, but at 850 words, it’s not too long to endure.

Plus, it’s better than listening to an hour of swear words pretending to be jokes while waiting to take your turn at the mic!