Saw The Electrical Life of Louis Wain the other night. It was pretty good. On Amazon Prime, I think. (As you can already tell, this is less a review and more of an impression, lol. I forget where I watch movies and only post about them a few days later, simply sharing some random thoughts.)

I didn't know much about Wain until this movie and my subsequent search engine results. (Here's a good summary of his life and work at Artsy.net.) But I do remember seeing some of his cat pictures growing up. Wonderful drawings that went through several stages of development as he got older and matured as an artist.

The movie (along with his life story and artwork) is quite trippy. I think they captured his "electrical" essence quite well. Evidently, he believed that we are moved by electricity, a life force of some kind. Well, he's probably not wrong.

At any rate, if you stream movies, go ahead and catch this one online. Nothing objectionable, per se, but it is filled with tragedy. Whimsy has its moments, but ultimately life is tragic. That's the theme I caught from watching this film. I disagree with that conclusion, but it does make for some interesting discussion if you are into talking about those kinds of things.

Did you see it yet? What were your thoughts? Happy to discuss even if we disagree. (One of his cat illos below. So fun!) 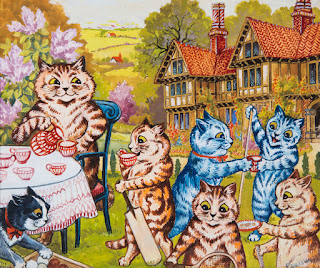 ~*~
"Tip a buck, get a book."
(via PayPal.Me - an e-book from Tule Fog Press.)
This blog is reader supported. Thank you for your support!
Find me on Facebook where I post nerdy memes and share about my writing projects.
Posted by Lyn at Monday, January 17, 2022