The Expanse - Strong Start Then Fizzled 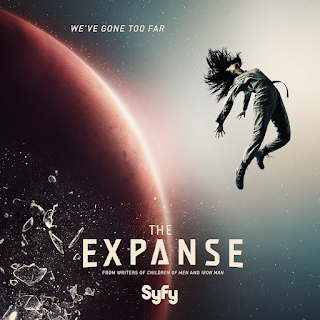 Well, I finished "The Expanse." First two seasons were really good, intriguing, different, compelling. Then these last four seasons were simply a mesh of conflict between the inners and the outers (not  referring to bellybuttons, btw).

I think it lost its way regarding the proto-molecule (the actual 'big deal' of the plot in the beginning) - or maybe I just missed the change of direction when the Ring was introduced.

Also, when Amazon took over from SyFy, the show became just too morose.

I was really looking forward to this final season as I'd heard good things. But in the last few episodes, I know I totally got confused.

Like, what happened to Marcos? (Sure, the aliens in the Ring absorbed him, but why?) And what the heck was that planet with the zombie kid all about?

Then, I saw Filip escape, but did he make contact with his mom? The show's supposed finale wasn't satisfying at all - it was a set up for another season that will never be made. Pretty lame.

One problem, I think, was that the ending was too rushed. I just couldn't follow anything the show's creative team was trying to accomplish. They didn't have any kid of denouement, imo.

Plus, too many f-bombs. I quit reading the books in the middle of book 2 or 3 (can't remember) because of the excessive foul language. Writers! You don't need to use the f-bomb. Trust me on this.

So a contrarian view, I'm sure. The Expanse started strong but fizzled. I wasn't even interested in Amos anymore after awhile. The best character of the final season was Drummer.

Anyway, what are your thoughts? Any highlights from the series that stand out for you? Are you reading the books? Comments welcome.

~*~
"Tip a buck, get a book."
(via PayPal.Me - an e-book from Tule Fog Press.)
This blog is reader supported. Thank you for your support!
Find me on Facebook where I post nerdy memes and share about my writing projects.
Posted by Lyn at Tuesday, January 18, 2022