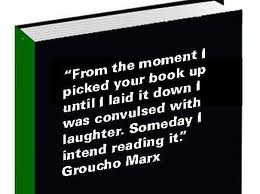 I struggle writing blurbs. I think a lot of writers do. But evidently, they sell books. Or at least they are part of the critical list of components that help buyers decide if they want to invest their hard earned cash into your book.

Last time I talked about covers. Yes, people judge books by the cover art. Especially in this digital age of browsing the lists at Amazon.

But people also read blurbs (and download samples, which I may talk about next time). And a good description of what your book is about can serve as a powerful hook for the reader to go ahead and make that impulse buy. Blurbs should hook readers, not bore them silly.

Awhile back I came across a blog called, Why Isn't My Book Selling? It features a couple of ebooks every week and attempts to critique why - based on the cover art, blurb, and first 300 words - someone's sales have stalled. People voluntarily send the host their information, including how many sales they've had, what marketing ideas they've tried, etc.

After posting all the pertinent details, the blogger will offer some commentary and throw open the discussion for anyone who happens to be lurking nearby. And boy, do guests add their two cents worth. I don't know how helpful it is to the author, but it is entertaining for those who aren't being skewered, that's for sure.

Here's the blurb and the first 300 words of my short story, "The Princess and the Zombie." It's a contemporary piece (well, alt contemporary - there is a zombie encounter after all) with some humor and a bit of sentimentality. It's unpublished and with no cover image yet, so obviously it's not selling! What I'm interested to know is if the blurb works and some thoughts about the opening. Be gentle, lol.

Jerry Farnsworth hadn't considered that his daughter Stephanie might actually be interested in Zombie Hunting. He'd always thought of her as his little Cinderella. But maybe Stephanie's tired of shopping and dresses and such. Maybe she wants a bit of adventure in her life. And just maybe she's sick of being called a little princess.

The Princess and the Zombie (excerpt)
by Lyndon Perry

Billy Farnsworth ran inside waving the mail. “Open it! Open it!” he cried, tossing his dad an envelope, the cellophane window indicating its official status. “It’s from the National Headquarters for Zombie Hunters, I just know it.”

Jerry Farnsworth tore open the letter with an enthusiasm that matched his son’s. The Father-Son Zombie Hunting Team had been waiting for their invitation to the national tournament ever since winning their regional competition. He quickly scanned the contents for confirmation and let out a whoop! The duo started jumping around the living room hootin’ and hollerin’.

Angela and Stephanie walked in on the celebration. “What in the world are you two boys shouting about?” Angela asked her husband. “You’re prancing around like Jack and Ginger ready to take a pee.” At the sound of their names the Farnsworth’s two hounds came bounding in from the kitchen to join the excited confusion.

“National Tournament for Zombie Hunting Enthusiasts,” Jerry chimed in. He skimmed the rest of the letter and added, “Only three teams from our region qualified and we’re the best of the bunch!” Father and son slapped palms and began their own version of the Zombie Monster Mash.

While the two “boys” continued to celebrate, Stephanie left the room without commenting. Only her mother noticed.

“I think she’s just jealous of the time you two spend together is all,” Angela said to her husband that night once they settled themselves in front of the television. “You and Billy were out zombie hunting every weekend this winter. And now he gets to go with you to Georgia.”

“It’s not like we’re on vacation, Ang. We freeze our tails off out there. Besides, you take Steph shopping every weekend.”

“But it’s not the same. She needs some father-daughter time with you. And you need your time with her.” Angela paused. “She’ll be dating soon, you know.”
Posted by Lyn at Monday, June 25, 2012