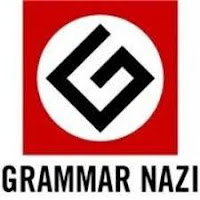 or The Confessions of a Former Grammar Nazi

Yep, I was one. I use to believe that grammar rules were absolute. But times have changed and so have I. Or rather, the rules have changed and I finally got a clue. Let's say it together: Grammar - that indefinable set of examples of syntax and word usage - changes over time.

That's right, indefinable. Oh, we claim there is this thing called Standard English Usage. But who decides just exactly what is standard at this point in time? What passes as standard here in America is different than the standard in Great Britain.

Now, granted, we all utilize a kind of Textus Receptus of English vocabulary, sentence structure, spelling norms, etc. All well and good. As a result of this usage we've developed a set of "rules" that explain what we've come up with. They tell us how we've been using English after the fact. Did you catch that? These "rules" are descriptive in nature. Not prescriptive. 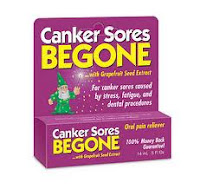 Bottom line? What passes as proper grammar is simply not written in stone. But many people insist that it is. Meet the grammar police. They'll correct you if you write or say something that doesn't jibe with their sense of propriety. They have rules and they're sticking with 'em.

Well, I have rules too. In future posts - consider this an occasional series - I'll tackle a few examples of what I think are just dumb grammar practices that some insist should be standard practices for everyone everywhere. Feel free to participate. But if you're into hard and fast rules, beware. I may turn my new anti-snooty cream on you: Grammar Nazi BeGone!

PS This is all in good fun, btw. Future discussion will likely include split infinitives, place of prepositions, double negatives, text-speak, etc. What are some of your most passionate beliefs regarding grammar?
Posted by Lyn at Monday, January 16, 2012