Tying up some dangling threads.

I promised I’d talk about wrapping things up in a tidy manner. I don’t know about you, but when I read a story that has a lot of unanswered questions, I’m not a happy camper. I even wonder about little things like (here’s a fictional hypothetical example), “What happened to that lady who showed up on page 50 with an important package and then just disappeared…I thought she’d be making a reappearance to explain her role in the mystery.” (Or something like that. You know what I’m saying.)

A writer’s rule, or at least as I’ve been taught, is that almost all details are important to the story, and if the detail isn’t important, then the writer shouldn’t draw attention to it. Yes, there are such things as MacGuffins, but even MacGuffins serve a purpose and are an important device to advance the plot.

In fact, I employ a MacGuffin in Secret Spice. For those not familiar with the term, a MacGuffin is what keeps the plot moving forward but ends up being sort of a red herring and not that important to the actual resolution of the story.

It could be something like the Maltese Falcon. Author Dashiell Hammett used a statuette of a falcon that is the centerpiece of the chase, thus providing the motivating intrigue to his story made famous by Alfred Hitchcock. It turns out the falcon isn't what everyone thought it was.

Now when my subconscious tells me to write something into the story, I usually comply. It’s my creative brain working on the story, and it knows a lot more about the story it’s telling than that critical voice inside my head does. What I end up doing, however, is I’ll often jot those strange little details downs so that I make sure I get them tidied up by the end. 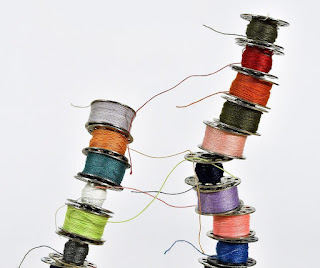 Sure, my creative brain will probably remind me of those dangling threads but sometimes I’m so wrapped up in forcing the ending to arrive that my ‘editor’ brain may forget those details. As mentioned earlier, for the story to be fulfilling and find resolution those extra things should be brought back around for a final appearance. At least in my opinion.

One quick example from Secret Spice without giving too much away. As I was finishing up the novel today (although I’m not completely done, I’ll explain about that tomorrow), my mind went back to an odd scene that my creative brain told me to write earlier in the book: someone had left a paperback at Ma Tutt’s Donut Hut, a cozy mystery, in fact, and I had no idea who’d left it.

But in the final few scenes, the person who left the book showed up at the Hut and claimed it. Who it was surprised even me, but it added just the right touch, IMO, to this person’s character, giving (him or her? no spoilers!) a new dimension to (his/her) personality hitherto unseen. Fun!

So after 2,100 words, I’ve basically concluded the story. Not happy with the exact ending, so tomorrow I’ll probably edit, add, think about, stress over, and eventually hit just the right note as to how it ends. I know how I think it should end, but I will sleep on it and let my subconscious confirm or alter what I have in mind. Yes, that’s my strategy!

Today’s Writing Tip…Let the creative brain (or your subconscious or whatever you want to call it) plant those seeds in your story, but be sure to water them and bring in the harvest by the story’s conclusion. (How’s that for a metaphor!) Want to read Ma Tutt's Secret Spice as I write it? I'm posting weekly chapters at my Patreon Page. By becoming a patron of indie fiction, you can read the novel as it unfolds before it hits the virtual bookstores. When it's completed, you'll get the finished e-book, fully edited!
Do you like original fiction with a speculative bent? Indie published sci-fi, fantasy, magical realism, horror and supernatural suspense? As a monthly supporter you'll receive new stories every month, a backlist novel of mine, and a weekly chapter of my current WIP. Give it a try! Details on Patreon.
~~~~~
Hey, I'm Lyndon Perry, a speculative fiction writer living in Puerto Rico. I'm a former pastor and current husband, father, coffee drinker, and cat-wrangler. You can find me almost anywhere online, so check out my various Linktree Locations and say hello!
Posted by Lyn at Saturday, July 16, 2022